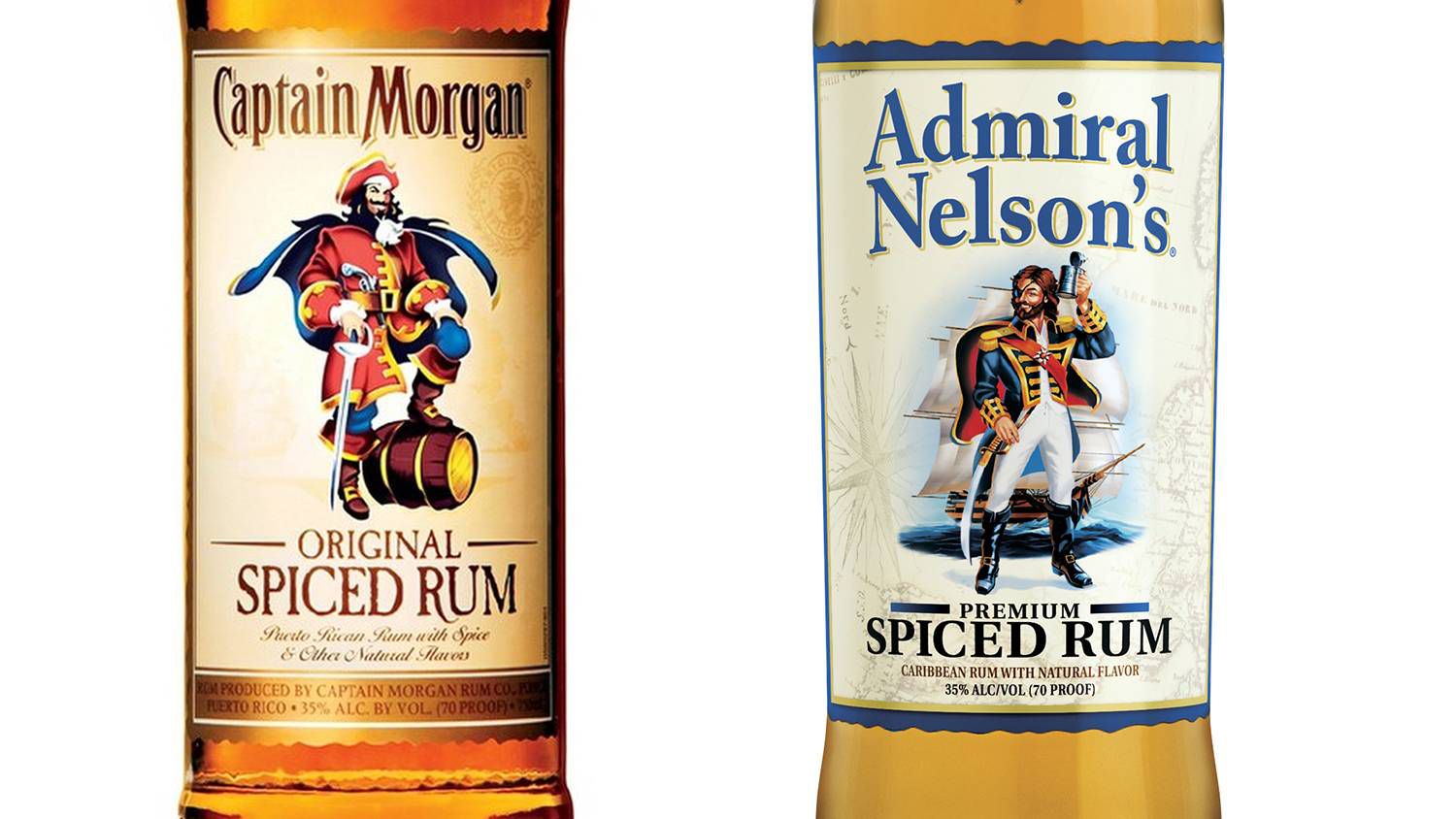 Diageo v. Heaven Hill: Passing off in the liquor industry

Earlier this summer Mr. Justice Boswell of the Federal Court of Canada released his decision in Diageo Canada Inc. v. Heaven Hill Distilleries, Inc., which resolved a trademark and passing off dispute between two significant players in the liquor industry. At issue in Diageo v. Heaven Hill is the similarity in Diageo’s Captain Morgan mark, and Heaven Hill’s Admiral Nelson mark. Both marks are used by their respective owners to identify and market their lines of rum.

Passing off exists at common law as a tort, and is prohibited under s. 7(b) and (c) of the Trade-marks Act.

What is Passing Off?

The procedural aspects of Diageo v. Heaven Hill are somewhat complex, and need not be repeated. For Alcohol & Advocacy’s purposes the salient issue is this: Has Heaven Hill been passing off its Admiral Nelson rum products as the goods of Diageo in contravention of the Trade-marks Act?

The principles behind the common law and statutory prohibition against a manufacturer passing off its goods as those of another (usually its competitor) are not difficult to understand: a manufacturer who has invested in developing goodwill (brand recognition) in its products does not want to lose business (and potentially its reputation) to a competitor who is selling its products in a way that confuses consumers into believing that its product is the “original”. Similarly, consumers have an interest in being able to readily distinguish the origin of the products they are purchasing based on the product’s packaging, design elements, or logos.

The plaintiff in a passing off action does not need to prove that the defendant was deliberately attempting to pass its products off as the plaintiff’s, rather the misrepresentation creating confusion for consumers can occur through negligence or carelessness. Put more simply: even if by complete coincidence your company’s beer, wine or spirits happen to look like a competitors, your company may still be found liable for passing off.

Diageo is a publicly listed corporation based in London, England and is one of the world’s largest producers of spirits. Through its affiliates and subsidiaries it owns various brands of alcohol including: Smirnoff Vodka, Tanqueray Gin, Johnnie Walker Scotch Whisky, Crown Royal Canadian Whisky, and others.

Heaven Hill is a private distillery based out of Bardstown, Kentucky. It is the 7th largest alcohol supplier in the United States, the second largest holder of bourbon whisky in the world, and the largest independent family-owned and operated producer and marketer of distilled spirits in the United States. In addition to the Admiral Nelson brand Heaven Hill’s other products (that are available in Canada) include Hpnotiq Liqueur, Two Fingers tequila and Evan Williams and Elijah Craig bourbon whiskey. Heaven Hill acquired the assets and business relating to the Admiral Nelson’s brand in 2011.

Each bottle of Admiral Nelson rum bears a label with a fanciful depiction of Vice-Admiral Horatio Lord Nelson, a British Naval officer in the late 18th and early 19th centuries.

Despite the two products existing in the Canadian market place for at least a decade, the same did not come to Diego’s attention until 2014, at which point it promptly sent a demand letter to Heaven Hill putting it on notice of trademark infringement.

As discussed above, passing-off involves considerations broader than merely copying a competitor’s trade mark. Generally speaking, simple trademark infringement is easier to spot, and similarly is easier to avoid by diligent business owners. Passing off in some cases can be more subtle, and occurs when a competitor’s products create an “illusion of sameness” that causes confusion in the minds of consumers.

At trial Diageo advanced the position that leaving aside its registered trademarks (e.g. the Captain) the “unregistered” aspects of its bottles (also called “get up”, “trade dress” or “distinguishing guise”) warrant protection from infringement.

The term “get-up” is normally used in the passing off context to mean the whole visible external appearance of goods in the form in which they are likely to be seen by the public before purchase. When goods are sold in packages (like rum bottles) the “get-up” includes the appearance of the package taken as a whole. For sophisticated manufacturers like Diageo, this carefully developed and marketed appearance plays a crucial role in the purchasing process since it is the chief means at the manufacturer’s disposal to attract customers.

Trademark law recognizes that a product’s appearance or its packaging — shape, size or colour — may be characteristic of a particular manufacturer and have the effect of marking out the product or making it recognizable as his own. In the mind of the customer, appearance is not always linked to a trade mark;  the consumer may rely on the appearance rather than the trade mark to indicate the use of the product.

Diageo describes the Captain Morgan “get-up” as including: the prominent display of a captain character with a ship behind him, a clear bottle with angled shoulders and embossing, and a coloured cap that coordinates with the outline of the main label.

Diageo claims that the trade dress of the Admiral Nelson rum is substantially similar to that of Captain Morgan, save for the words “Admiral Nelson” and that Heaven Hill has passed off its Admiral Nelson rum products as emanating from the same source as those offered by Diageo. According to Diegeo there is an “illusion of sameness”.

Heaven Hill denied that Diageo had any enforceable trade mark rights in the Captain Morgan trade dress.  Heaven Hill’s position was that there are other rum products distributed in Canada which use nautical or British themes, haves characters on the label, and use different label colours to distinguish varieties within their product lines.

In order to establish that Heaven Hill has “passed off” its Admiral Nelson product for Diego’s Captain Morgan products Diageo was required to prove three elements:

The court, when considering whether similar packaging will create confusion in consumers’ minds, will apply the “the average or ordinary consumer somewhat in a hurry” test. In this instance the test requires that the court consider whether an average and ordinary consumer who walks into a liquor store to purchase a bottle of rum, and does not pause to give the matter any detailed consideration (e.g. reading labels closely, or examining the bottles side-by-side), would be led to believe that Admiral Nelson’s rum is affiliated with Captain Morgan’s rum or is otherwise manufactured by Diageo.

In Diageo v. Heaven Hill the court found, on a balance of probabilities, that a casual or ordinary purchaser of rum products would likely be confused as to the source of Admiral Nelson’s rum. In support of this conclusion Diageo led expert evidence in the form of a consumer survey of 629 Canadian adults of legal drinking age, residing in four Canadian cities, who had recently purchased a bottle of rum.

The survey’s mandate was two-fold: one, to assess general impressions of Admiral Nelson’s Premium Spiced Rum; and two, to measure the extent, if any, to which purchasers of rum mistakenly infer that a bottle of Admiral Nelson’s Premium Spiced Rum originates from the same source as Captain Morgan’s rum.  The in-person mall-intercept survey was conducted during July and August, 2016, in shopping malls in Moncton, Montreal, Toronto, and Edmonton; cities chosen to provide geographical coverage across Canada as well as to allow for a comparison between cities where Admiral Nelson rum is available for sale (i.e., Moncton and Edmonton) and cities where it is not (i.e., Montreal and Toronto).

The author of the report concluded, and testified at trial, that there is statistically significant evidence that Captain Morgan rum is brought to mind by the Admiral Nelson rum bottle. Moreover, the report further concluded that there is evidence of “misapprehension of source”, meaning that rum purchasers are likely to mistakenly infer that a bottle of Admiral Nelson’s rum originates from the same source as Captain Morgan’s rum.

The court made an order enjoining Heaven Hill and its distributors from selling, distributing or importing Admiral Nelson products into Canada, and destroying or delivering-up any Admiral Nelson rum currently in Canada.

The court also held that Diageo was entitled to an award of damages to be determined, as well as its costs and pre-judgement interest.

Licensees in British Columbia, especially those in the start-up phase, should pay close attention to their own intellectual property – as well as the marks and get-ups of their competitors. Not only should licencees be vigilant in ensuring that their competitors are not profiting from their goodwill, but they should also ensure that their trademarks are properly registered and are not infringing on the marks of competitors.

If your business has questions or concerns about trademarks, or other aspects of the liquor industry, contact Dan Coles at Owen Bird.

*Alcohol & Advocacy publishes articles for information purposes only. They are not a substitute for legal advice, and persons requiring such advice should consult legal counsel.

Retired bartender. Young lawyer. From the East, living in the West. Interested in British Columbia's producers and purveyors of wine, beer and spirits.
